When is it safe to approach a power line on the ground, and is it okay to drive over these lines?

It’s never safe to approach a power line that is on the ground! (This is often called a “downed” power line.) Approaching downed power lines can be fatal. You don’t even have to touch a downed line to be electrocuted. Electricity always wants to go to the ground and can reach you through the ground if you get close enough to a downed live wire. Stay at least 30 feet away from any downed line. Call the your local power company immediately, to report the location of any downed line. If the downed line is life-threatening (for example, sparking or on top of an occupied car), call 911.

Some people think it’s okay to drive across downed lines, believing that the rubber in the car tires will protect them. While that is true to some extent as long as you stay inside the car, the greater danger is that the downed wire can become entangled in the car’s axle or wheels. This could cause you to pull down the pole or could prevent you from being able to drive any further. Bottom line: do not drive over downed power lines unless it is a last resort.

Why is my power out but my neighbor still has electricity?

This could be a result of one of the following reasons:

Your home may be served off a different distribution circuit than your neighbor’s home. If this is the case, the circuit serving your neighbor’s home is working as it should, while the circuit serving your home has sustained an outage. This process is similar to when you have a breaker trip or blown fuse at home. The home’s circuit that has the blown fuse or switch will be without power, while the rest of your home will still have power since it is being served by another circuit(s).

Your home may have damage to your overhead service. Sometimes during storms there can be damage to your weatherhead (roof-mounted pole structure) where the electric service comes into the house. Your weatherhead belongs to you, so if it is damaged and in need of repair, it is your responsibility to get a licensed electrician to fix it before the PUD can legally restore power. Once necessary repairs are completed, the power company will send a serviceman to make permanent connections and restore power.

Why aren’t more details available about outages and when power will be restored?

In general, the power company cannot list specific addresses that are without power, since outages are often widespread throughout. Plus, with ongoing restoration efforts, the location of outages changes very quickly. It is very difficult for the utility to predict how long a specific customer will be without power, due to the sheer number of jobs that need to be completed, changing weather conditions, availability of crews and repair supplies, and a number of other factors. Adding to that, trees that have fallen on power lines or brush that limits access to restoration sites may need to be cleared before repair work can begin. This can often be an all-day job. Often, crews may not be able to estimate how long a job may take until they arrive at the site to begin clearing it for the work.

Do emergency safety issues impact storm restoration? What if I have a wire down on my property? Will a crew respond faster?

The power company gives high priority to emergency situations such as a life in danger. In cases when wires are down, are visibly burning, or are part of a higher voltage primary line, the repairs will receive higher priority. In cases when service lines (going directly to a home) are down on a resident’s property, the power company will make the repair as soon as possible after main or primary lines are restored.

How should customers with medical conditions prepare for potential power outages?

Customers with a medical condition that requires uninterrupted electric service should make plans to assure their safety in the event of a power outage. They should consider acquiring a source of standby power or determine if an emergency generator is available. They may want to make arrangements with friends, relatives or a local agency to transport them to an area where electricity is available. While the PUD strives to provide continuous electric service to customers, it cannot guarantee that occasional power outages or failures occur. During winter months the likelihood of power outages increases due to seasonal storms.

Should I unplug sensitive electronic equipment during a power outage?

Yes. These types of electronics do not handle power surges well, and the return of power after an outage may entail a brief surge of power. In fact, during a power outage, you should also turn off any electric item that was on before the outage except for one light so you know when power is restored. Not only does this protect your appliances, it eases the electrical demand when power is restored.

What types of things should customers keep in their homes in case the power goes out?

Everyone should be prepared for all types of scenarios. Having a good emergency kit available everywhere you spend time. Power outages can last anywhere from a few seconds to weeks. Having enough candles, light sticks and even a generator are essential.

This Small Perfect Kit would make a great holiday gift for your child’s teacher, your boss, your neighbor, your mail carrier or anyone you need to find an inexpensive gift. This kit will let them know you care and that you put a lot of thought in to it.

1979 – At Cincinnati’s Riverfront Coliseum eleven Who fans were trampled to death in the rush to gain admittance for general (unreserved) seats to the band’s concert.

1984 – In Bhopal, India, more than 2,000 people died and about 150,000 were injured when toxic gas (methyl isocyanate) escaped from a Union Carbide insecticide plant.

1999 – In Worcester, Massachusetts, six firefighters were killed while fighting a fire at a warehouse. The fire had been accidentally set by a homeless couple.

Looking for a great survival kit? Check out this 2 Person Perfect Survival Kit

Posted by on 3/15/2018 to News
1974 – In Tehran, Iran, 15 people were killed when a Sterling Airways flight caught fire after the right main landing gear collapsed while preparing to takeoff. Eighty-one people survived the incident.
1999 – In Bourbonnais, IL, a passenger train collided with a truck at a railway crossing. Eleven people were killed and over 100 were injured.

2001 – Off Rio de Janeiro, Brazil, a series of explosions on an offshore oil rig killed 11 people.

The earthquake, which has left buildings tilting at 45-degree angles, was the 94th tremor since a quake hit Taiwan on Sunday. 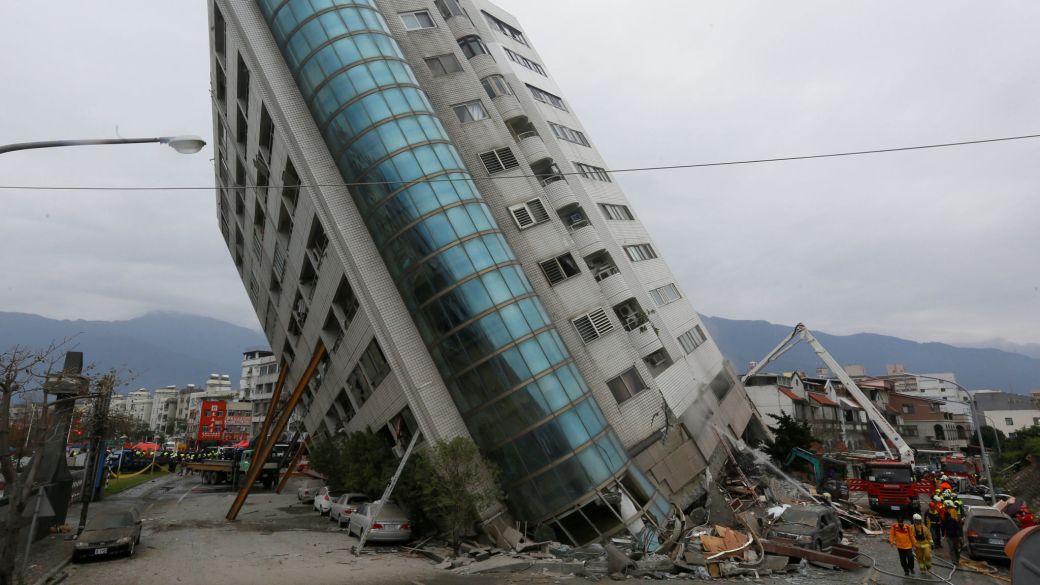 If you plan to use a wood stove, fireplace, or space heater, be extremely careful. Follow the manufacturer’s instructions and remember these safety tips:

A nuclear blast is an explosion with intense light and heat, a damaging pressure wave, and widespread radioactive material that can contaminate the air, water, and ground surfaces for miles around. A nuclear device can range from a weapon carried by an intercontinental missile, to a small portable nuclear device transported by an individual. All nuclear devices cause deadly effects when exploded.

The likeliness of an intercontinental missile striking the United States is slim, while the possibility of a portable nuclear device being smuggled into the country is not so far-fetched. Let’s face it, the ware bouts of all the nuclear devices is not clear.  Rouge nations are trying to obtain such a device, many terrorists too would like to have a “bomb” in their possession.

The CDC said its briefing, which is scheduled for the afternoon of Jan. 16, will address “planning and preparation efforts” for such a strike. The agency said most people “don’t realize that sheltering in place for at least 24 hours is crucial to saving lives and reducing exposure to radiation.”

This comes on the heal of President Trump and North Korean dictator Kim Jong Un have been engaged in an escalating battle of threats and taunts over their respective nuclear arsenals. A defiant Pyongyang has made major advances to its nuclear program over the past year, and has directly threatened Americans. Trump has responded by saying the U.S. would “totally destroy” the hermit kingdom, a nation of 25 million people, if provoked. It has become a war of male ego when Trump stated “his button was bigger”.

In the event of an actual nuclear war, “there would be survivors for days trying to make their way out of the rubble and back home, dying of radiation poisoning,” Jeffrey Lewis, a nuclear policy expert at Middlebury Institute of International Studies at Monterey, previously told HuffPost.

The danger of a massive strategic nuclear attack on the United States is predicted by experts to be less likely today. However, terrorism, by nature, is unpredictable.

In general, potential targets include

The three factors for protecting oneself from radiation and fallout are distance, shielding and time.

Taking shelter during a nuclear blast is absolutely necessary. There are two kinds of shelters:

Remember that any protection, however temporary, is better than none at all, and the more shielding, distance and time you can take advantage of, the better.

Before a Nuclear Blast

The following are things you can do to protect yourself, your family and your property in the event of a nuclear blast.

During a Nuclear Blast

The following are guidelines for what to do in the event of a nuclear explosion.

If you are caught outside and unable to get inside immediately:

After a Nuclear Blast

People in most of the areas that would be affected could be allowed to come out of shelter within a few days and, if necessary, evacuate to unaffected areas. The heaviest fallout would be limited to the area at or downwind from the explosion. It might be necessary for those in the areas with highest radiation levels to shelter for up to a month.

Returning to Your Home

Remember the following when returning home:

1969 – In Surrey, England, an Airana Afghan Airlines flight crashed due to pilot error. 50 of the 65 people onboard were killed. An additional two people were killed on the ground.

To prepare for disasters go to http://www.Emprep.com

Today in
Disaster History
1975 – In Moscow, Russia, 61 people were killed when an Aeroflot flight crashed shortly after takeoff.

1976 – In Moscow, Russia, 87 people died when an Aeroflot flight crashed into houses after takeoff as a result of an in-flight fire.

Please visit our store at www.emprep.com If there is something you need but you don’t see it on the site, use the contact us form to let us know and we will do our very best to find the product for you.

Welcome to the blog for www.Emprep.com

We will work hard to keep you up-to-date on the newest preparedness news, tips and products.